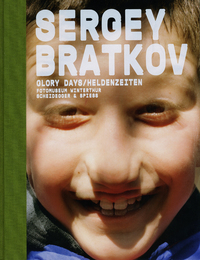 Ukrainian photographer Sergey Bratkov (*1960) is internationally acclaimed for his powerful images of contemporary Russia. But despite his many global exhibitions, his work has rarely been published. Sergey Bratkov is the first survey of the photographer’s influential oeuvre.

Raised and educated in the Soviet Union, Bratkov has spent his career training the penetrating gaze of his camera on the fractured lives and bleak structures that pervade the region. Some of the images presented here are unsparing documents of daily life after the collapse of the Soviet Union, with poverty, prostitution, and homelessness among the many issues he tackles. In his expressive portraits, he strips away the ideological clichés of the communist years—and subsequent aspirations for Eastern capitalism—to reveal the complex reality. Essays by Thomas Seelig, Boris Buden, and Bart de Baere, and an interview with the artist by Anna Alchuk and Mikhail Ryklin draw out the social and artistic criticism embedded in Bratkov’s work, while not denying the powerful lyricism of his images.

Published to coincide with a 2008 exhibition at the Fotomuseum Winterthur, Sergey Bratkov is essential for art scholars and historians alike.

The atlas of beauty