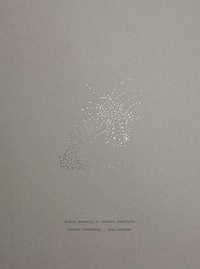 Henrik Strömberg (artist) and Jens Soneryd (writer) started their joint project The Compost in 2016. For them, the compost is a point of departure to explore alternative ways of being in the world, alternative practices of doing, thinking, sensing, seeing, and understanding. With “alternative ways of being in the world” they refer to perspectives that challenge the instrumental and reductionist ones that are predominant today, which provide a technocratic attitude towards the world, its objects, structures and societal institutions, but also toward its humans and other living beings, its nature, language and art.

According to the technocratic attitude, art works are means for communicating simple messages or for performing certain functions, and they are valued according to their potential of doing so - the aim of the work of art is to deliver certain measurable results that are decided in advance. Thus, contemporary art is part of the creative economy, it is attuned to the logic of advertising, design, and tech companies.

Within this view, lives are translated into projects, human beings are translated into brands that compete on various markets such as the labour market, the education market, the love market and so on, while nature appears first and foremost as something to be predicted, controlled and dominated, translated into a function as convenient resource. Thus, forests are transformed into either agricultural land or tree plantations, rivers into hydro-plants, mountains into mineral reserves or ski-resorts.

Failures, eccentricities and deficits are hidden in the pursuit for simplicity, success, and perfection. Human-as-brands lead active, social and eventful lives, not primarily for the joy of learning, experiencing, meeting people, and so on. Verbs like “living”, “experiencing”, “encountering”, “loving”, “desiring” have no intrinsic but only functional values. The actions they signify aim only to stage an eventful and prosperous life on social media; living as branding, that is.

Is it possible to love a forest that has become a tree-plantation? A river that has become a hydro-plant? A human being that has become a brand? A work of art that can be translated into a simple message without anything being lost in translation? A nature whose meaningfulness has been replaced with functionality? Probably not. Therefore, object amnesic: a compost manifesto aims to contribute to the re-enchantment of the world, by translating back functions into meanings, tree-plantations into forests, answers into questions, and first and foremost by turning our attention to the processes rather than to the intended results.

The book deals with topics such as growth and decay, memory and forgetting, permanence and change, the desiring gaze and the detached gaze. It also reflects on technologies for understanding, such as writing and photography. These are powerful technologies developed as aides for making visible, mapping, fixing, organising and governing. In short, they are powerful tools for keeping, controlling and preserving. object amnesic: a compost manifesto explores if and how these technologies also can be applied in opposition to their intended usages, if they can also be deployed to un-learn what we have learned from them.

It questions the predominant technocratic Cartesian view on nature as something to be measured, predicted and controlled. It challenges the very notion that control is a desirable achievement. Instead of trying to control and to govern artistic or natural processes, the book encourages us to join these very processes, to become part of them, or simply to acknowledge that we already are part of them despite that we most often pretend not to be.

And just like any compost, the book is an assemblage of things in various stages of completeness as the objects in the compost are not registered, and no actions are undertaken to save them from oblivion or decay - forgetting is just as important as remembering, ambivalence and doubt are just as important as knowledge and certainty. To reach without being able to reach is just as important as grasping. The aim of a compost is not to reach answers, explanations, or conclusions, but to produce fertile soil. So is the aim of this book.