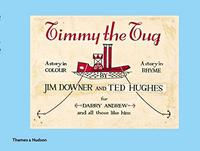 Vigorous, witty and […] free from the temptation of talking down to his readers … there is something too poignant for words about Downer’s childlike delight in these lines and drawings of 1950-something ’ – The Times

'T & H have done it beautifully, of course, and the poem is very fresh, as well as fascinating. The illustrations are really sensationally good I think – not just because that they’re so evocative of their time'– Andrew Motion

''Hughes has a wonderful flair for witty, child-friendly doggerel and demands to be read aloud again and again' – Saga Magazine

Originally written in the mid-1950s and only recently rediscovered, the lyrical poem by Ted Hughes, written to accompany a story that was conceived and delightfully illustrated in watercolour by his friend Jim Downer, is presented here as a facsimile of the original manuscript.

Timmy was a paddle-boat, sound as a gong,
Not a worm in his timbers, fresh paint all over.
He was hale as a whale and twice as strong,
And he sailed on the peaceful river.

So begins the enchanting tale of Timmy the Tug and his subsequent adventures as he escapes his moorings and explores the high seas. With his heart in the right place, Timmy struggles at first to be as helpful as he would like to be, despite all his efforts, but by trying and trying and trying again he at last saves a beautiful ship in distress and so recovers his sense of pride.