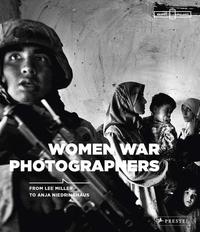 Women have been on the front lines of war for more than a century. With access to places men cannot go, the women who photograph war lend a unique perspective to the consequences of conflict. From intimate glimpses of daily life to the atrocities of war, this exhibition catalog reveals the range and depth of eight women photographers' contributions to wartime photojournalism.Each photographer is introduced by a brief, informative essay followed by reproductions of a selection of their works. Included here are images by Lee Miller, who documented the liberation of Dachau and Buchenwald. The first woman journalist to parachute into Vietnam, Catherine Leroy was on the ground during the Tet Offensive. Susan Meiselas raised international awareness around the Somoza regime's catastrophic effects in Nicaragua. German reporter Anja Niedringhaus worked on assignment in nearly every major conflict of the 1990s, from the Balkans to Libya, Iraq to Afghanistan. The work of Carolyn Cole, Francoise Demulder, Christine Spengler, and Gerda Taro round out this collective profile of courage under pressure and of humanity in the face of war.