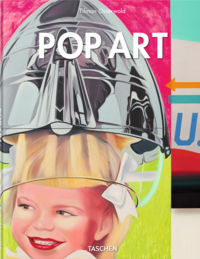 Less a distinct style than the concrete expression of being in a particular era, Pop art is regarded as one of the most influential movements in modern art. From Lichtenstein’s comic book aesthetics to Allen Jones’s much-contested female figure furniture, this overview examines the origins, pioneers, and stand-out pieces of a movement which resonates to this day.

Less a distinct style than the concrete expression of being in a particular era, Pop art began as a revolt against mainstream approaches to art and culture and evolved into a wholesale interrogation of modern society, consumer culture, and the role of the artist and artwork.The movement’s primary provocation was to defy ideas of the artistic canon or “originality” by integrating mass market imagery into their works. Whether advertising slogans, famed Hollywood faces, comic-strip-style characters, or the packaging of consumer products, the likes of Robert Rauschenberg, Claes Oldenburg, Andy Warhol, and Roy Lichtenstein knowingly reproduced mundane, everyday images from popular culture.At the same time, Pop art reduced the role of the individual and challenged the notion of originality by deploying mass production techniques such as screen printing. Like a hall of mirrors, the resulting works came to interrogate both the ideas and desires of contemporary culture, and its state of simulacra, whereby images, substitutes, and representations come to define the experience of “reality.”In this book, Tilman Osterwold explores the styles, sources, and stars of the Pop Art phenomenon. From Lichtenstein’s comic-book aesthetics to Warhol’s images of Marilyn, it explores how a movement that interrogated the icons of its time came to produce icons of its own.

The Little Book of Legs